The month of December has been called the ‘most wonderful time of the year’.  There are several reasons for this title, but one in particular, in my opinion, is its time of year for sports. We are at a beautiful crossing of fall and winter sport in which college football gears up for holiday bowl games while college basketball sprints ahead into preseason and conference play.  College volleyball is just finishing up tournament competition. The NFL, NHL and NBA are all in session. Truly, it is a most wonderful time of the year. 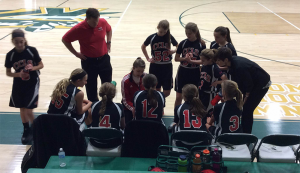 The overlap of sports isn’t just seen at the highest levels of competition. It trickles down impacting our middle school and high school-aged youth as well. It’s not uncommon for young athletes to be competing on the “in season” school sports team while also playing club ball or indoor for an “off season” sport.  Any way you slice it, there is a lot of competing going on.

If there’s one thing I know about those who consider themselves competitors at any age or level, it is their drive for self-improvement and success.  Athletes put in hours of hard work training and conditioning, caring about their bodies and nutrition while putting in rep after rep to get the skills and plays down just right. There is a hunger and thirst to succeed, to see their team at the top of the league, to win.

All the adrenaline and intensity doesn’t leave much room for error.  A grown man and a 6-year-old girl can be seen making the same pouting face when they mess up. Tears and devastation follow when a close game slips through their grips.

Maybe you can relate?

It’s hard to swallow defeat when you’ve been training and preparing for the moment, envisioning a successful outcome and doing everything in your power to achieve this goal.

Is this not our life as followers of Jesus?

We desire to faithfully follow the good works God has prepared for us to do. After each time of repentance, we are even more determined to “do better” and not give into the next temptation. We want to exhibit the fruits of the Spirit and will do everything in our power to be an “MVP” in the body of Christ.

You know where the story goes from here. You and I know the bitter taste of defeat. We know the tears and devastation of messing up again, of not living up to what we’ve envisioned, and letting down those around us.

Yes, the concept of grace, though simple, can seem just as foreign and complex to us as it does to athletes. The idea that our skill sets and contributions aren’t what determine our value in the eyes of our Creator is dumbfounding.  To think that our game-changing performance isn’t what earns us the title of “MVP” before God is hard to swallow.  After all, that’s not how a coach decides who starts the game or how a boss determines who is up for the end-of-the-year bonus.

And so, this is indeed a most wonderful time of the year.  We are again reminded in the midst of our competing and striving that God has a foolproof game plan already in place for our salvation.  During this season of Advent, we prepare our hearts and minds to hear the angels, follow the shepherds, and see the manager’s baby boy.

A baby in a manger.  He’s not a chiseled 6’6” power forward with a 30” vertical and gym rat mentality.  He is a newborn babe, dependent on His mother for nourishment.  God has a way of using the simple, “underdog” things of this world to carry out His victoriously powerful, perfect plan.  Even here at this part in God’s plan of salvation we already get a taste of grace.  This baby has done nothing to “prove Himself” besides being born.  Yet already, He is sought after and worshiped because God has appointed Him as the One who will redeem His people. And indeed, Jesus does redeem God’s people.

So, too, with you. In your athletic ability or lack thereof, in your daily battles with sin and interactions with others, you are marked and redeemed as children of God in your baptism.  We are freed from the obsession to perform as a means for gaining acceptance or proving our worth.  In the life, death and resurrection of Jesus, we are freed to perform as stewards of what God has given us and for the benefit of others.

Find that youth during this holiday season.  You know, the one you think has been spending more time in the gym than anywhere else.  The one who just got injured and isn’t sure what the rest of the season will look like now.  The one who is team captain and leads the team triumphantly.  The one who dishes out more water bottles than assists. Find that youth.  Remind them that their athletic performance isn’t the indicator of their identity or value.  Free them to be the best teammate they can be by reminding them of the grace that is ours wrapped up in swaddling cloths and lying in a manager.

Why lies he in such mean estate
Where ox and ass are feeding?
Good Christian, fear; for sinners here
The silent word is pleading.
Nails, spear shall pierce him through,
The cross he borne for me, for you;
Hail, hail the word made flesh,
The babe, the son of Mary!