– Her first day as our deaconess fieldworker, she rushed to the HUD facility on our campus to come to the aid of an elderly woman who slipped in the shower. The elderly woman’s arm dangled in mangled pieces, she was draped only in the shower curtain and blood.

– Shortly after being installed, our deaconess found herself cradling a local prostitute on the floor of a psych ward after the woman slit her wrists in an alley with a broken bottle. The deaconess tried to stop the spiritual bleeding as best she could.

– A woman from the section 8 housing across the street from the church pulled down the sleeve of her shirt to show me the scar where her husband had shot her in the shoulder before he kicked her down the steps.

– A young man rolls up his sleeves to show me where his family member had put out his cigarettes in the boy’s flesh.

– The person in the confessional tells me the bloody details of how they killed their family member and now sought relief in the absolution of their mortal sin.

– The child tells me that he never knew his father who was killed by another family member, and his mother was taken away by the police for using drugs.

– The African immigrant family, clearly rattled as they came to our VBS that morning, had just seen a slain teen laying in the hallway of their apartment after a drug deal gone bad. The mother of the murdered young man would later come by the office to receive spiritual care for her grief.

– An LCMS church member takes me down the street from the church where 5 people had been shot on a Sunday morning. One afternoon their vicar would come back to the church covered in the blood of a gang member who he found shot in cold blood.

– A fellow pastor calls to tell me another one of the folks that I met in the homeless camp where we visited had been stabbed to death.

– The wounds still raw and fresh in Ferguson, the angry young man with spittle projecting from his lips, shouts “Fxxx your God, you don’t care nothing about me, you are just here to get some shine.”

– This was not the first time I had been cursed. One time a man wounded by addiction and mental illness screamed “Fxxx your soul,” when I refused to buy him drugs. He proceeds to tell me Jesus only drinks beer and smokes buddha. He probably doesn’t know I’ve seen the wounds of addiction far too often, the scars of the crack pipe on the lips, the needle track marks that run up and down the arms. This disturbed homeless man wouldn’t know about the call that came shortly after his curse, the call from a brother pastor to tell me that a member of his church was found dead in their church bathroom from a heroine overdose.

No, I know these wounds all too well. The wolf has fangs with which he pierces the lamb, and the eagle has talons with which he snatches the sheep. Wounds, scars and bloody death are an every-day part of the mission field of the inner cities of America. I wish I could offer you exotic locales with luxurious food to consume, beaches to lounge on, or a badge of honor for doing mission work in the rugged global terrains of some faraway land. (Granted, the summers are plenty sticky hot and winters harsh enough in the city.) I wish I had a museum with names of Lutheran lore who gave their lives in mission to serve in gritty tough urban terrains. But gangs and pimps and poverty and crime do not make for flashy travelogues. No fanfare for the sending of those who heard the call “whom shall We send to the city?” and who responded with, “send me.”

I am not saying we don’t work hard for it in the trenches of urban mission, but I don’t know why God allowed my inner city church to have a cover story for mission with centerfold appeal. Maybe it was just to allow me to encourage others to keep believing in the resurrection that was and is to come, to keep carrying the cross, or to encourage others to support those who do. I wish I could tell you that the rain showers of the Gospel now cover America’s inner cities and that people are joining the Lutheran church by the millions, seeking our theology of the cross. But I can’t. I also cannot offer a magic bullet to change things either. But better than some elusive magic bullet, on Good Friday, what I can give is this: blood, sweat, and tears.

Jesus says that we are to be a city on the hill for all to see, the light that banishes the darkness (Mt 5:14). He stands atop a hill looking down – not at strangers in a strange land – but at His city and His people. He laments during Holy Week because He has seen what the wolf and the eagle will do when the sheep are without their shepherd or the brood refuses to be gathered under the wings of the hen (Mt 23:37). He enters the city a hero, but He will be thrown outside the city as a criminal sentenced to death. He hangs from a cross between two men receiving the death penalty. Blood, sweat, and tears: Christ will live and die among the city’s low-lives. This is who He serves, the feet He washes, the tables He sits at, the very ones He will pour himself out for . . . and it maddens the religious elite.

When Christ’s disciples see the suffering, sacrifice, and death that comes from following Him, they find a place to hide, cowering in fear from what awaits them in the city. But denied, abandoned, forsaken, a risen Christ steps into the midst of their fears and pronounces His peace among them. He reinstates them to serve His Church. He sends them to preach repentance and forgiveness, to wash feet, to care for the poor, and to be stewards of the mysteries entrusted to them. He sends them in His Spirit to go into the city and to sacrifice all for the sake of the Gospel.

We may not have much in the inner city to allure, but this we do have: blood, sweat, and tears of joy. This is because we have the Cup of Salvation, we have the Bread of Life, and we have fonts that overflow with mercy from ordinary city water and the very Word of God. We have a Body of Christ that has compassion on their neighbors who struggle to get by, who bring healing to the wounded, who help others to carry their crosses, together in community. We have a global mission field outside our door, and we have the frontlines and beach heads of domestic mission. We have a bunch of no-name missionaries in “weak” little churches who are truly giants of urban mission. Who are these? They are those of whom God will say “well done good and faithful servant.” Christ became a man to face universal, human problems. People everywhere struggle with despair and death, and one thing cities aren’t lacking in is people. So the compassion of Christ drives us headlong back into our cities armed with His glorious Gospel.

To the world, the city church or urban school may seem to be a product of its surroundings: hungry mouths to feed, inadequately dressed, and left out in the cold. To the world, the inner city may seem at times a barren wilderness, a place of scars and bloody death, but for those who have served, it is a place of healed wounds, white garments, eternal dwelling places, and crowns of eternal life. Conformed to Christ, we pick up that cross daily, we carry it all the way to the tomb. In Christ we have no fear, because if we are baptized into a death like His, so we are baptized into His resurrection from the dead. We now walk in this newness of life. 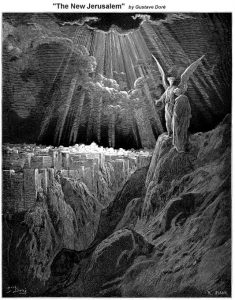 As Jesus says of this newness to the church in the ancient city of Philadelphia: “I am coming soon. Hold fast what you have, so that no one may seize your crown. The one who conquers, I will make him a pillar in the temple of my God. Never shall he go out of it, and I will write on him the name of my God, and the name of the city of my God, the new Jerusalem, which comes down from my God out of heaven, and my own new name. He who has an ear, let him hear what the Spirit says to the churches.” [Revelation 3:11-13]

Let there be no doubt, the Word of the Lord endures forever! Out of chaos, death and decay comes peace, salvation, and new life. This is why the major cities of our nation are some of the greatest mission fields of our day. There is no more challenging yet rewarding ministry in the world.

There is a need for heroes of the city to pray, give and go. If you’d like to help us to stand in the city with Christ, then please connect with us at lcms.org/citymission or be a part of our network at facebook.com/lcmscitymission. You can also contact us at uicm@lcms.org to find out more. God bless your Holy Week.