In a series of posts, Aaron J. Silletto, member of Concordia Lutheran Church in Louisville, Kentucky, and an attorney allied with the Alliance Defending Freedom, addresses the upcoming Supreme Court ruling on same-sex marriage.  You can read Mr. Silletto’s first post here.

The Fourteenth Amendment, referred to in both questions the Supreme Court agreed to answer, does not mention marriage specifically. The Amendment states in relevant part, “No state shall … deprive any person of life, liberty, or property, without due process of law; nor deny to any person within its jurisdiction the equal protection of the laws.” The plaintiffs have claimed that laws limiting marriage to opposite-sex couples violate both the Due Process Clause and the Equal Protection Clause of the Fourteenth Amendment. As is often the case, whether the Court agrees with the plaintiffs or the states will depend upon how it characterizes the rights at issue and the states’ justifications for their laws. 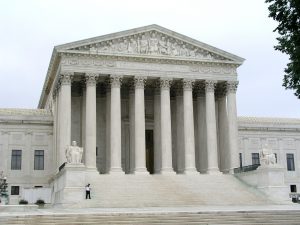 Ordinarily, the Supreme Court has held that a state law does not violate the Due Process Clause unless the right supposedly being abridged by the law is “deeply rooted in this Nation’s history and tradition.” If the Court agrees with the states that there is no deeply rooted right to same-sex marriage specifically, it will hold that the laws do not violate the Due Process Clause. However, if the Court agrees with the challengers that the right at issue is a more general right to marry, which the Court’s precedents hold is a fundamental one, then it may hold that the laws violate the Amendment’s Due Process guarantee.

The Equal Protection Clause essentially asks whether the law at issue is a rational means of furthering a legitimate governmental interest. The interests asserted by the states include, as mentioned above, encouraging biological parents to raise their children together, providing an optimal setting for raising children and promoting stable population growth. The plaintiffs variously argue that these proffered governmental interests are not legitimate, that the laws do not rationally promote these interests or that they are motivated solely by a discriminatory animus that can never be justified. At a very basic level, the Court’s assessment of the “interest” and “means” issues are value judgments, and the justices’ values will therefore determine the Equal Protection analysis.

Aaron Silletto (asilletto@goldbergsimpson.com) is a member of Concordia Lutheran Church in Louisville, Kentucky, and is an attorney allied with the Alliance Defending Freedom.