Tonight in our small burg just like many other places around our great nation, there will be a football game.  But here, it won’t be any ordinary game, it’s the first round of district play so all eyes are on the big prize.  No doubt, it’s going to be Epic!  As will every other game around the nation.  And afterward, no matter where, win or lose, on the way home and in barbershops and coffee shops on Saturday morning, there will be Epic tales to 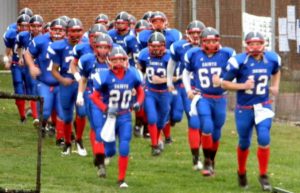 ld of games won and lost, Epic plays made and Epic coaching fails.  There will be remembrances of Epic players and Epic calls.  But one this is for sure…it will be Epic!

I’ve got to tell you, I’m very tired of so much “EPIC”.  We elevate even the mundane to such extraordinary levels that we simply lose sight of reality.  For example, I just saw another report of a brawl breaking out over a little kids football game. Why?  Winning that game would certainly lead to an epic career in football for those youngsters and how dare anyone detract from that.  Don’t get me wrong, I’m a huge sports fan but this is just ridiculous.  And this certainly isn’t confined to the realm of sports, Everything in our world today is such a BIG deal! We have to live in an Epic home, drive an Epic car, eat Epic meals with our Epic family with Epic talents who are Epically Epic…it’s exhausting.  And if someone seems to be slipping ahead, people are swift to be offended  and quick to condemn.  But I fear the real problem isn’t in our “reality tv/winning is everything” way of thinking.  What is most troubling is that in making everything epic, we trivialize the truly important.

According to dictionary.com, Epic is defined as such:

noting or pertaining to a long poetic composition, usually centered upon a hero, in which a series of great achievments or events is narrated in elevated style: Homer’s Iliad is an epic poem.

resembling or suggesting such poetry: an epic novel on the founding of the country.

heroic; majestic; impressively great: the epic events of the war.

of unusually great size or extent: a crime wave of epic proportions.

spectacular; very impressive; awesome: Their burgers and fries are epic!

Can someone tell me how Homer’s Iliad is lumped into the same category as a burger and fries?  What’s worse, in our vain pursuit of making ourselves Epic, we have relegated the only truly Epic thing in our lives to simply mundane.  That thing…our Savior!  His Word, His Work, His Sacrifice, His Resurrection, His Grace, His Mercy, His Love, His Church.  This is the truly Epic!  And in a “majestic; impressively great” way and to an “unusually great size or extent” our God has poured these gifts out upon us.  In a truly Epic event called Baptism we were made new and now in a genuinely Epic way we get to worship Him.  We are blessed to receive His Sacrament of the Altar, we are forgiven and renewed to live a life witnessing to the One and Only Epic God, Father, Son and Holy Spirit!  This is the Epic gift we are given, whether we are in a in sprawling campus in the city or a humble prairie church, it’s the same gift from the same God “who desires all people to be saved and to come to the knowledge of the truth” (1 Tim. 2:4 ESV)

Perhaps it’s time for a little perspective.  A little less narcissism and a little for Awe and Majesty for the One who is actually Awe Inspiring and Majestic.  I for one can think of nothing more Epic than that!