On September 4-14, a sixteen member team travelled Madagascar, providing care to our brothers and sisters in Christ in conjunction with the Malagasy Lutheran Church and the Lutheran Hospital in Antsirabe. During the course of the week, we treated 1803 patients and dispensed almost 6000 prescriptions. Patients were treated for infections, typhoid, malnutrition, parasites, and many other illnesses and conditions.

On the day after our arrival, we were blessed to attend the annual national gathering of the Malagasy Lutheran Church—it’s comparable to the LCMS National Convention. It was inspiring to see so many people who live so far away from us, but share the same faith as us. 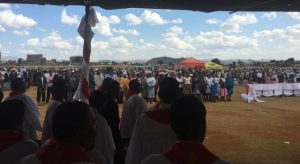 Each morning began with travel to the clinic for the day, usually at a very rural Lutheran church. The people were lined up, waiting for us. Each day began with hymns and prayers, and a greeting from the pastor.

One day, we served 423 people at a church that has never been visited by a mercy medical team before because of the difficulty in reaching the remote area. It is impassable during the rainy season, but we made it! In Madagascar, the roads are shared by pedestrians, bicycles, rickshaws, cars, semi trucks, and carts pulled by oxen. We travelled on the paved road for 80 km, and then along a dirt track for another 19.  It took almost three hours to get there. The people were so excited to see us! 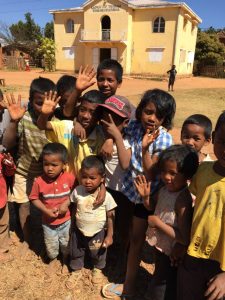 Each patient touches our hearts, but the stories of the children seem to stay with the team long after the trip ends. During this trip, two young children were referred to the hospital in Antsirabe to correct cleft lips, which were interfering with breast feeding and delaying growth. Their mothers had tears in their eyes when they were informed that there would be no cost for the procedure. 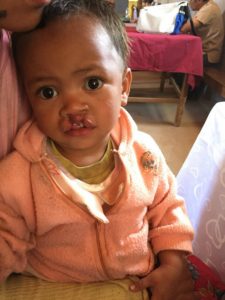 A young girl could not see to read. The smile on her face was priceless when she received a pair of glasses. 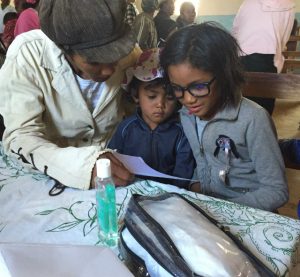 Another child was two years old and weighed just 6 kilos (about 12 pounds). His mother had died, and he was living with his grandmother, who could not afford to buy milk or food. She now has a six month supply of formula, plus money to buy fresh food as well. 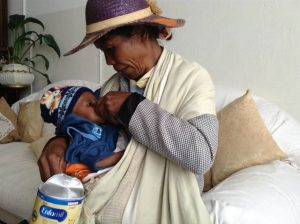 In addition to the clinical work that we did, the team did community health education, teaching hand washing and dental care. On one clinic day, there were about 200 children learning how to brush their teeth. When we asked how many of them owned a toothbrush, only about 10 or 15 did. It brought such joy—to the team and the residents—to hand out toothbrushes, toothpaste, soap, and shampoo.

Every evening after dinner, the team prepared the medications and supplies for the next day. Sometimes things got a little silly as tiredness set in. 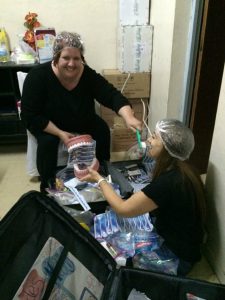 On the way home from clinic one day, the rough dirt road was too much for one of our vehicles, and we broke down. The family from the closest farm came to help, and they were Lutheran too! It was an honor to meet them and realize that we shared the same faith. 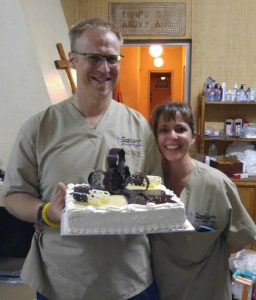 One of the churches in which we held clinic was proud to show us their new tin roof, that had been provided through the LCMS “Tin Roofs for Africa” project.

After a week of hard work, the team visited a lemur preserve in Andisabe for some well-deserved rest. The lemurs live on an island, and visitors must cross a river in a canoe to reach them. 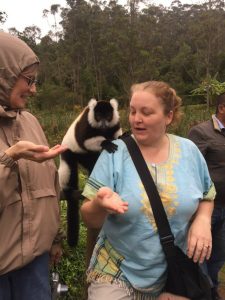 One canoe, carrying three members of the team, tipped over! Fortunately, the water was only a couple of feet deep. We asked the guide how often canoes tipped over, and he said, “Never!” It was the first time anyone had ever tipped a canoe.

We thank God for the work that was accomplished during our trip in Madagascar. I think I speak for the entire team when I say that it was our Malagasy brothers and sisters who served us, rather than the other way around.

Have you ever considered participating in an LCMS Mercy Medical Team? For more information, contact tracy.quaethem@lcms.org.