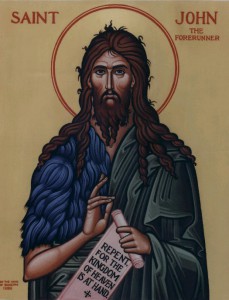 eath of John the Baptist

14 King Herod heard of it, for Jesus’[a] name had become known. Some[b] said, “John the Baptist[c] has been raised from the dead. That is why these miraculous powers are at work in him.” 15 But others said, “He is Elijah.” And others said, “He is a prophet, like one of the prophets of old.” 16 But when Herod heard of it, he said, “John, whom I beheaded, has been raised.” 17 For it was Herod who had sent and seized John and bound him in prison for the sake of Herodias, his brother Philip’s wife, because he had married her. 18 For John had been saying to Herod, “It is not lawful for you to have your brother’s wife.” 19 And Herodias had a grudge against him and wanted to put him to death. But she could not, 20 for Herod feared John, knowing that he was a righteous and holy man, and he kept him safe. When he heard him, he was greatly perplexed, and yet he heard him gladly.

21 But an opportunity came when Herod on his birthday gave a banquet for his nobles and military commanders and the leading men of Galilee. 22 For when Herodias’s daughter came in and danced, she pleased Herod and his guests. And the king said to the girl, “Ask me for whatever you wish, and I will give it to you.” 23 And he vowed to her, “Whatever you ask me, I will give you, up to half of my kingdom.” 24 And she went out and said to her mother, “For what should I ask?” And she said, “The head of John the Baptist.” 25 And she came in immediately with haste to the king and asked, saying, “I want you to give me at once the head of John the Baptist on a platter.” 26 And the king was exceedingly sorry, but because of his oaths and his guests he did not want to break his word to her. 27 And immediately the king sent an executioner with orders to bring John’s[d] head. He went and beheaded him in the prison 28 and brought his head on a platter and gave it to the girl, and the girl gave it to her mother. 29 When his disciples heard of it, they came and took his body and laid it in a tomb.

In the Name of the Father, and the Son, and the Holy Spirit:

Herodias wants your head.  You pricked her soul, you shamed her, and now she has a grudge that not even the gift of half a kingdom will appease.  So know this, if you call yourself a prophet, a messenger of God, the world will not rest until they have your head on a platter – not just some bloodthirsty extremists far far away with sword in hand.  The entire world has a grudge for calling them to repentance. You tell them something is not lawful, you tell them Christ is the only way to forgiveness, and they won’t settle for anything less… they want you silenced, not ceasing until your mouth stops confessing.  Of course they think they are serving whatever god they worship, but little do they know they are merely doing the work of the evil one, who wants nothing more than to drive you from the faith and silence the Word of God in the process.  But the devil, the devil wants more than your head, he wants your heart, he wants your body and soul, he wants it all… he wants nothing short of eternal death for you, all of you.  He wants to drum and drum until you finally give up the fight, surrender to your fears of persecution, surrender to your earthly sinful desires, surrender to him.  He wants you to succumb to his ways only to cut you down with guilt and shame and despair, and then he has you.  He will either entice you or try to convert you at the end of the sword.  Oh righteous and holy herald of God’s Word, of this you can be sure.  The evil king of this world sends an executioner with orders, “Don’t come back until I have their heads, and the body, the body is in the tomb dead to sin.  Bring me their heads!”

But the King of Heaven and Earth, the King of Heaven and Earth says, you can’t have it – belongs to me.  Look at this King’s head: he gives His royal head to the crown of thorns.  Look at His body: he gives his holy body over to the whip, to the nail, to the spear and to all that is unholy.  Look, look and see the Lamb who is led to the slaughter for the forgiveness of all of your sins to ransom your body and soul.  He is bound, imprisoned, beaten, flogged, crucified… the world and the devil will have their pound of flesh.  And the evil one thinks he has cut the head from the body of Christ, when the sky turns to darkness and the earth shakes as the blood spills to the ground and Christ breathes His last.  But then, then the tombs are opened and the dead are raised from their sleep, completely intact.  And on the third day, on the third day the trumpets sounded, the stone rolled away.  Do you know what that means?!  Not even death could separate us from the love of God, the evil one could not take the head from the body of Christ, and just as our head was raised, so too will we the body will be raised from the tomb.  So brothers and sisters in Christ… what is there to fear, of whom shall I be afraid?!  I am baptized into Christ!

You can bind me, imprison me, you can have my head, but you will not hush the Word of God, you will not take our breath which comes from the Holy Spirit, you will not silence the voice of Christ, and even our blood will cry out from the ground.  So whether it is in the midst of riots or under the cover of dark alleys or under severe Christian persecution, we will be strong and courageous.  Because ours is a God who heals, who makes whole, who raises the dead in the Day of the Resurrection. You are baptized and now you carry Christ’s death in your bodies, but also His Life is manifested in your bodies.

So Herod may knock our blocks off, Pilate may crucify, but for all of Pilate’s hand washing it won’t make them clean, nor will Herod’s banquet and dancing ever satisfy him.  No, we have the water that alone can cleanse, we have the bread and wine for the only banquet that will satisfy.  And so we will not stop!  We will not waver!  We will not surrender!  Because you my friend are a prophet from the days of old, the voice crying from the wilderness to prepare the way of the Lord, you have the very Word of God placed upon your lips.   And so nothing, nothing will stop us from preaching hell and salvation for the redemption of the lost… and not even the gates of hell will prevail.  Because these are the ones coming out of the great tribulation. They have washed their robes and made them white in the blood of the Lamb.  So when the darkness of the evil one and violence and death overshadows, we will be there to bring the light of Christ.  Come what may, so help us God, we will bring the light!