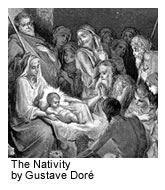 Luke 2:4-7 (NIV) The Birth of Jesus 2  4 So Joseph also went up from the town of Nazareth in Galilee to Judea, to Bethlehem the town of David, because he belonged to the house and line of David. 5 He went there to register with Mary, who was pledged to be married to him and was expecting a child. 6 While they were there, the time came for the baby to be born, 7 and she gave birth to her firstborn, a son. She wrapped him in cloths and placed him in a manger, because there was no room for them in the inn.

It was a cold winter night. Joseph and Mary would have been tired and hungry from their long journey.  And once they finally arrived, there was nowhere for them to stay.  You know the story, the baby Jesus would be born in a stable and laid in a manger which was the animals’ feeding trough.  But what does it all mean?  To the world around them, it didn’t seem like much important was going on in that stable behind the inn.  Just some simple folks having their first child… written off by the world as not being very valuable.

But as the angels announced, there was something magnificent happening that night. It may have looked like poverty to all those more important and wealthier people in the inn, but to the angels and shepherds there that night; it was the Son of God stepping down from Heaven to earth.  In the darkness of a sinful planet came the Light of the world who beamed with hope.  Into Bethlehem, the city of Bread, surrounded by a world starving for God’s love, came the Bread of Life lying in a feeding trough.  And there wrapped in torn up cloths laid the King of Kings who had the world as His footstool, and to whom the angels sang their praises day and night.  But now He humbled himself to be made a child born in poverty.

And so began Christ’s compassion for the poor and needy.  He would one day grow up to feed the hungry, to heal those who were forced to beg for food, and he would forgive the poor in spirit who thought they could never be forgiven.  But Jesus Christ didn’t just have compassion for our suffering, He lived it and He conquered it.  He would starve in the wilderness, be tempted by the devil, be imprisoned and tortured by soldiers, He would have his friends abandon Him, and have His last possessions gambled away at the foot of the cross – that He would die on, for us.  That’s right all of this poverty and suffering was for YOU!  And so was His rising into glory.

Apart from God – we are all in the dark, we are all hungry, we are all homeless and alone. And when it comes to being saved by God, we are all beggars with nothing to offer.  But God sent His Son to lavish us in the richness of His love and mercy.  So my dear friends if you feel unwanted, unloved, unforgiven, lonely and written off by the world as unimportant, then let me just say this – Merry Christmas!

God has sent His Son because you are wanted, you are loved, and you are forgiven.  You are so precious that God would send His one and only Son to be born, to live, and to die in poverty so that you can have eternal life in glory with Him.  A life where there will never again be darkness or hunger or suffering or loneliness or broken heartedness or guilt or shame.  Even if this world has no room in the inn for you, God will always have a place for you in His House forever!  May the richness of God’s grace be with you all as we remember the birth of the newborn babe, who gives to all who believe, the very inheritance of the Kingdom of God.  Amen.